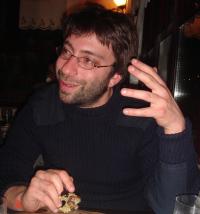 I am currently a post-doctoral fellow in the Max Weber Programme at the European University Institute specializing in the twentieth-century cultural and intellectual history of Western Europe and Turkey.

My reasearch interests include Turkish-EEC/EU relations, the history of European Integration, national planning, and the vagaries of Turkish nationalism and Westernization in the 20th century.

At the moment, I am working on my first book, Joining Europe: Civilization and Nationalism in Turkish-EEC Relations, which details the existential grip that Turkey's membership bid to the Common Market had on the Turkish social-imaginary.

As a visiting assistant professor at Bowdoin College and Columbia University, I have taught courses on a variety of topics including European intellectual history, radical democracy, social movements, and the national imagination.